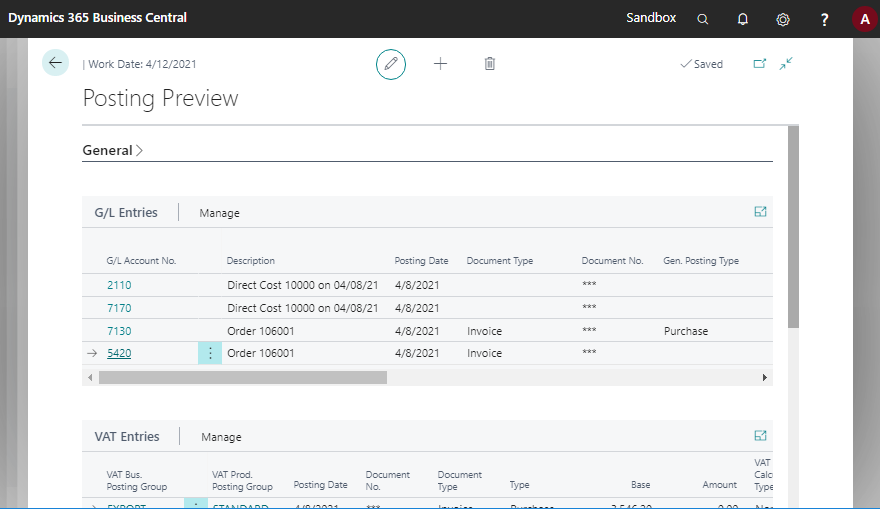 A new extended preview feature has been added for posting of General Ledger Entries and VAT Entries. This might be a new feature that was added in D365BC 2021 Release Wave 2. (The reason I wrote “might” is I can’t find any release note in Docs of 2021 release wave 2. I believe it will be coming soon.)

Open the General Ledger Setup page, where you will find a new field called Posting Preview Type, which is set to Standard for Cronus.

Let’s try to preview the posting of a Purchase Order, for example.

Then you will see a list of ledgers that will be created by the posting, and you can preview each ledger entries by selecting it and clicking ‘Show Related Entries’ button.

This is the preview page of General Ledger Entries.

This is the preview page of the VAT Entries.

Preview the posting of the same purchase order as before.

As you can see, you can quickly preview the General Ledger Entries and VAT Entries.

Other Ledgers are shown at the bottom. Scroll down and you will see them in the traditional format. Click on the number of Ledger you want to see.

You will then be able to see a preview of the target Ledger in the same format as before.

When you preview the posting, you will most often see the General Ledger Entries, so it’s a good idea to set the Extend option to save the time of selecting the ledger from the list and opening them. In this example, we have shown a preview of a Purchase Order, but the same preview page can be displayed for a General Journal page. So you might be able to see the new type of preview in the same way as long as the preview screen is used to create General Ledger Entries and VAT Entries.